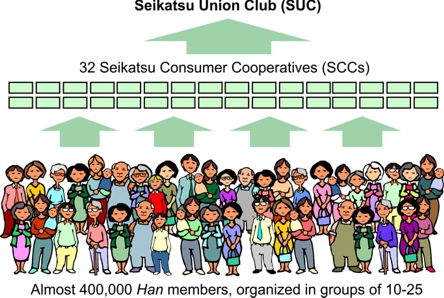 A Decentralized, Democratic Movement that is Transforming Japan's Food System

“Seikatsu" means “living people.” The significance of this for members of Japan's Seikatsu Consumer Co-operative is a down-to-earth story of transformation in process. The cooperative's humble beginnings involved women sitting together at kitchen tables talking about food. Some disturbing trends in their region bothered them - an increase in imported foods, the consistent loss of farmland to development, and the accelerating migration of farmers to the cities. They were also worried about the quality and safety of their food, a concern closer to their kitchens that was deeply rooted in the privation so many suffered in the post-war years. Hunger from the period marked the consciousness of a broad swath of the population. It was from this fertile ground that cooperatives grew, aided by the introduction of legislation in 1948 and the rapid formation of the Japanese Consumer Cooperative Union in 1951.

In 1965, a group of women approached a local farm family with an idea to address the issues of concern to them. The essence of their proposal was that the farmer would provide their families with fresh milk, fresh fruits, and vegetables, and the families would guarantee to pay a negotiated fair price. The farmer agreed so long as they organized a large enough number of people willing to commit to purchasing the farm's production. A contract was drawn and the teikei concept was born. Translated literally, teikei means "partnership,” but philosophically it means "'food with the farmer's face on it.” Twenty years later, the teikei idea migrated to the United States, inspiring the first community-supported farm at Indian Line Farm.

The heart and root of the Seikatsu movement is a collective purchasing model that seeks to make the co-op itself a "living instrument" for social and ecological change. The basic building block of Seikatsu is the Han ("small group"), which in local areas collectively plans and purchases food. The Han was not a new type of group. They were first used in 1956 as an organizing tool for member participation by the Tsuruoka Co-op in the northeast of Honshu,Japan's largest island. They became a key strategy for distributing products within the burgeoning co-op movement and strengthening relations between members, both of which were important to the creation of a federated system for coordination across larger geographic areas. What emerged as an ideal Han consisted of seven to ten members, each representing a household that would participate on a voluntary basis. Today there are about 11 million members of Hans throughout Japan, most of them belonging to co-ops associated with the Japanese Consumer Cooperative Union.

Underpinning the Han concept within Seikatsu is a countercultural per­spective on human time and how it can be used creatively to strengthen human connection with each other and with the environment. Han mem­bers consider time in relation to three forms of work: employed work, work for others (care and social support), and work for the collective good. For example, Seikatsu Club members view the time and energy required to shop in corporate supermarkets as a waste of time, better invested in real­izing their goals of safe food, healthy farmland and farmers, and living more sustainably. Thus, through Seikatsu practice, cooperation has become incarnated as a "living instrument.”

Founded with the aim of acquiring safe food at a reasonable price, the Seikatsu Hans concretely express their values by specifying strict standards for materials, production processes, packing materials, and environmental practices, which are then negotiated with producers. The resulting agreements are the basis for the pre-order collective purchase system, which in turn enables a well-planned production and supply system. The purchase of safe food at reasonable prices, the minimization of waste of natural resources, and the reduction of environmental impacts are among the generative results. More than 350,000 members now operate through thousands of Han groups, aggregating their purchase plans within one or another of the 32 Seikatsu Consumer Cooperatives (SCC). These in turn are affiliated nationally into the Seikatsu Union Club (SUC).

The SUC has adopted the term "consumer materials" to describe the products they purchase. The language is indicative of the principles they operate under. Members see themselves as employing their collective purchasing power to secure goods for their "use value,” not as "commercial goods.” Every month the SUC's Consumption Committee meets to determine the items to be purchased collectively based on member's demands and views. Members participate in extensive testing of new consumer materials. Taste, packaging, and price preference are determined through member engagement, combined with market research to design draft specifications. These are then discussed with producers. A critical appraisal of the production process reviews what can be done; packaging, content, volumes, and price are among the key focus of such discussions.

Seikatsu gains efficiencies by limiting the number of regular items provided to 1,600 annually. (This is in contrast to the 9,000 items carried by the 600 other consumer co-ops in Japan, with 22 million members - and to the much larger number of products and brands in modern mega-supermarkets.) Keeping the system simple significantly reduces inventory costs, thus creating one source of savings that allows the co-op to increase the price to the farmer while keeping prices to the consumer reasonable. By concentrating on a narrower range of high-quality products, producers and processors also gain important efficiencies.

Further efficiencies are gained through adherence to some basic principles.

To ensure its specifications are met, the SUC has established its own independent control and auditing system. Members and producers set the standards together through sector committees for agriculture, fishery, livestock, processed food, packaging materials, etc. Between 2007 and 2010, 6,500 people participated in 790 unannounced spot inspections. This participatory approach to certification is much less bureaucratic and much less costly than the third-party audits most certification systems require. Moreover, the learning and relationship-building between members and producers is much more profound, a benefit the annual audit by an outside consultant or accountancy firm cannot achieve.

The relationship between the purchasers and the producers of food extends to the planned participation of consumers as a source of labor supply. Because the average age of a Japanese farmer is 67, planting and harvesting demands can limit their capacity to assure the supply of healthy, nutritious food. Organizing labor in solidarity with farmers began in 1995; its initial success was to secure stable production of tomatoes for organic juice for Seikatsu members.

In another example of solidarity, Seikatsu organized member capital, which, along with farmer investment, enabled the start-up of three milk-pro­cessing plants to supply urban consumers. One hundred producers owning 5,000 cows are now co-producing a product with a high level of raw milk, an alternative to the ultra-high-temperature (UHT) sterilized milk dominant on the Japanese market.

By 2010 the annual turnover based on the purchasing Hans was US$1.1 billion. Accumulated equity was close to $1 billion due mainly to each member voluntarily paying $11 per month until he or she has contributed $3,500. There is also a $60 membership fee for the local SCC and another $60 for the SUC. This equity underpins the financial stability of the system. It is indicative of the importance placed on members being co-responsible for the health of the system, a fundamental cornerstone of the "Living People" model that Seikatsu represents. By investing time and money in various parts of a mutually supportive relationship with producers, they realize a key value of their movement: their democratic autonomy as members.

Today, the SUC is not only implementing a "'values added" strategy aimed at transforming the food system but has also taken up recycling, green energy development, and social services. The union's advocacy around food-related issues has led to some significant policy changes.

It is little wonder that the Seikatsu movment received the honorary Right Livelihood Award in 1989. Considered to be the "alternative Nobel Prize,” the award was given to the "housewives' movement" for its success in generating a form of "alternative economic activity against industrial society's prioritization of efficiency.” The prize commended the movement for its continuing interest in human health and the environment through its production of essential materials for living.