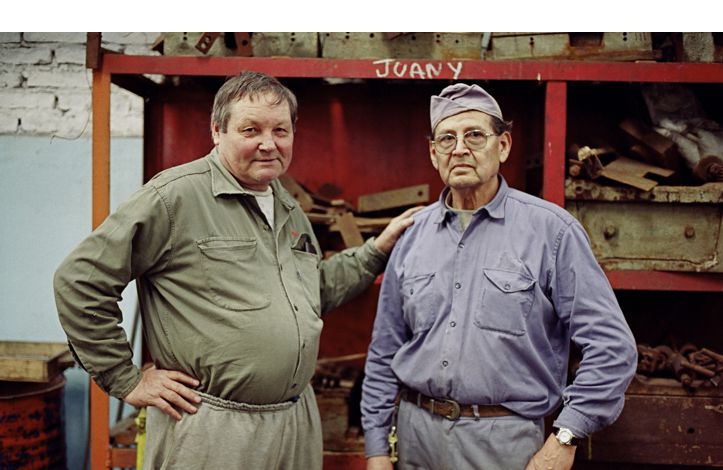 When corporate capitalism fails to deliver, what can? Argentina offers a dramatic test case that bears comparison with the transitions that are happening in Canada and other parts of the world.

During Argentina’s economic crisis in 2001, many industries closed their doors. Employees found themselves locked out, without social security or unemployment insurance, sometimes after years of being paid in IOUs. What to do but … go back to work anyway? Hundreds of people returned to abandoned plants, occupied them, refurbished and then re-opened them, often as worker-co-operatives. (In the photo above are two of the owners of Metal Varela, a foundry south of Buenos Aires.)

Most of these 200 or so “recovered” factories have survived the partial restoration of Argentina’s economic situation in the last six years. Their competitive advantage has been a dedication to neighbourhood, to a trade, to a way of life – and to exchanging goods and services amongst themselves. They act as a local economic unit, not as curiosities bolted here and there onto the “real” economy. The value they place on people, place, and relationship enables them to function, even flourish, where your garden-variety capitalist either fears to tread or couldn’t be bothered to.

But for examples of the “recovery movement” closer to home, look no further than that hotbed of corporate capitalism, the province of Alberta. Over the last five or ten years the corporate world has been backing out of the rural towns of Westlock, Alliance, and Sangudo. None of the premises – a grain terminal, a railway spur, and a meat-packing plant, respectively - were abandoned and dilapidated, as was often the case in Argentina. Instead, due to inadequate returns on capital or to an owner’s retirement, an economic mainstay of these towns and their surroundings was in danger of being sold to interests that would scrap them or transfer their assets to larger centres.

Co-ops recovered all three industrial units: Westlock Grain Terminals New Generation Co-op, Battle River Railway New Generation Co-op, and Sangudo Opportunity Development Co-op. In addition to workers, each co-op drew members from the community as a whole. In each case, residents answered a share offering that capitalized the co-op, so it could purchase the premises, re-fit them, hire management and staff, and make ‘em go.

The money involved here is not insignificant, especially for small communities: $1.2m for Westlock; $3.4m for the Battle River Railway; $220,000 for Sangudo. So far the risk has been well worth it. Driven by the need to serve the community as well as to return dividends and capital gains to individual investors, these co-ops are turning an adequate profit and much more. They are employing local people, building local assets, and revitalizing a parcel of rural Canada where corporations driven by profit alone demonstrably could not. Jobs, skills, equipment, and control that stood poised to drain away instead have stayed local.

How common can this get? In times like these, when the cumulative costs of corporate capitalism to consumers, communities, governments, and the environment are overtaking its benefits, that’s a question that needs answering.

Photo courtesy of Paula Surraco and The Working World.

i4 is an ejournal about Inspiring, Innovating, Inciting, and Inventing ways of life and work that permit humanity and the planet to thrive in this century of unprecedented challenges. i4 is a publication of the Canadian Centre for Community Renewal.