A Convergence of Child and Salmon 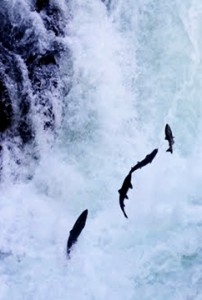 For every author the journey starts somewhere. For me, Michael Lewis, it started with a jolt, a painful epiphany that propelled my awareness across generations. For 35 of the last 40 years my home was on a family farm about 20 km outside of Port Alberni on the west coast of Vancouver Island. Every autumn we tramped down to the Stamp River to witness to coho and giant Chinook salmon struggle up the river. Rushing currents, cascading falls, towering rocks and……

In October 2003 the tramp to the Stamp was a watershed moment for me. I had my 3-year-old granddaughter with me. Amira was utterly enthralled with what she saw. Seeing the world through the eyes of child seems to amplify the wonder somehow.

What choked me that day was the juxtaposition of wonder and the threat revealed to me the day before in a peer-reviewed scientific journal. Its message was simple – if water temperature continued to go up salmon would be extinct in 40 years. Amira’s grandchild might never know the wonder of returning salmon. What I was sharing with her that day would become just another story of what once was.

That was the origin of The Resilience Imperative: Co-operative Transitions to a Steady-State Economy (New Society Publishers, 2012). Click here to purchase.

Climate change was not completely outside of my consciousness. I was kind of aware. I knew scientists were talking about rising temperatures and there might be some implications. But I had other fish to fry, so to speak.

My focus since I was 20 was on strengthening community economies, especially among disadvantaged communities. I worked in some of our poorest neighborhoods, helped start scores of businesses, was the president of two First Nation joint venture forestry firms. I organized networks, helped train thousands of people, wrote books and articles on what was working, what wasn’t, why and how do we support scaling success and change what was thwarting innovation. I was a busy guy.

We all know how it is. There are only so many hours in a day. And life is hardly slowing down. People at my age wonder what happened with increased leisure time futurists were projecting 40 years ago. Seems to me most of us are just running harder and harder. Stopping to study, reflect and think? Ha…..what a dream. When the treadmill is running faster and faster, suddenly stopping means getting bumped off the treadmill. One can fall right out of the race. 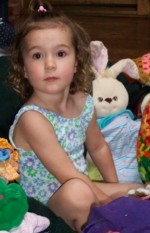 Yet, this is precisely what happened to me down on the Stamp with my first grandchild. It was as if I was hit in the gut. The threat to what I knew and loved broke through and shook me to the core.

I had to stop. I had to read. I had to listen and think. And the more I learned the more I discovered how little I knew. Indeed, at times, I felt what I did not know seemed to be ever expanding universe. But I did come to one basic conclusion: We are living in an unprecedented period in human history! Clearly we are the most successful species on earth; adaptable, inventive, creative, resilient. Yet, it seems equally clear there has never been a century in the 2000 centuries we have existed, when we have been so vulnerable and when it has been so plausible to contemplate the possibility of our own demise.

Why do I say this? There are several parts to my answer but let me begin with a humorous depiction of the economic treadmill we are on, as described by Thomas Friedman of the New York Times:

But we got a problem, big time. Whether we can bend the curve of history in time for our kind to survive remains to be seen.

Writing The Resilience Imperative over the last 3 1/2 years clearly demonstrated to me that it is possible. Whether it is probable, that is another question. The tension between the two is at the heart of this book and our purpose "to make hope more concrete and despair less convincing."

Michael Lewis is Executive Director of the Canadian Centre for Community Renewal. He and Pat Conaty, a fellow of the new economics foundation, are the co-authors of The Resilience Imperative: Co-operative Transitions to a Steady-State Economy. Click here to download more details, including a synopsis of the contents. In the photo, Michael (at left) and Pat pause while rambling in the hills of Wales.